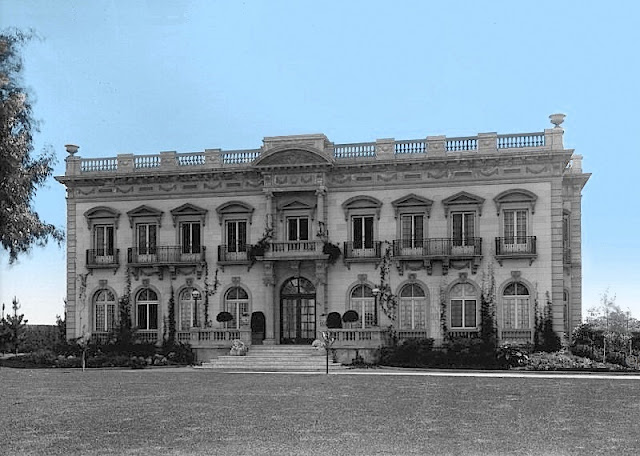 The year before Lucien Napoleon Brunswig built his lovely palazzo, the first house had been built in Beverly Hills, toward which Wilshire Boulevard was extending westward with aspirations of usurping West Adams as Los Angeles's grandest residential avenue. Brunswig, as were many of the city's plutocracy, continued to bank on the more settled air of leafy West Adams Street, itself extending toward the Pacific. While most of the West Adams corridor occupied a broad flat plain, the boulevard began to run atop a southerly slope beyond Manhattan Place; from that intersection estate-size lots, as opposed to mere suburban parcels, began to be carved from local landowners' holdings on the south side of the roadway. After the turn of the 20th century grand houses began to appear here, their façades oriented north at street level but with dramatic terraced gardens behind them. The prospect from the new houses toward the ocean was like nothing available on Wilshire Boulevard; as for Beverly Hills, lot sales were slow there and it would be a decade or more before big money would decide to live year-round on estates in its actual hills, where similarly impressive views could be had. With new big-money settlers such as Brunswig beyond Western, Adams Street would hold its own for at least another 15 years.

In 1902, Emeline Childs, the rich widow of old Angeleno Ozro W. Childs, had built a big modern Colonial house on an enormous parklike tract she had acquired at the southwest corner of Adams and Arlington streets. Once settled in impressively at what was later numbered 3100 West Adams, Mrs. Childs began to attract other of the city's rich to the neighborhood, and it just so happened that she had spare property to her west that she would be willing to sell to other estate-minded homeseekers. After an already long and lucrative career as a wholesale druggist, 53-year-old Lucien Brunswig was estate-minded by early 1908. Born in Alsace, he arrived in America in 1871. Having built up his business by way of Atchison (Kansas), Fort Worth, and New Orleans, he was naturalized in 1888 and on May 1 of that year partnered financially with Angeleno Frederick W. Braun to establish the pioneering Los Angeles firm of F. W. Braun, which would be the only exclusively wholesale drug firm in the city. Entrenched in his New Orleans business as well as involved civically—he was the Crescent City's police commissioner from 1895 to 1899—it would be another 15 years before Brunswig would pull up stakes and settle permanently in an altogether new Southland, now convinced that the future of his company lay to the west. In 1907, he bought out Braun, changing the name of the company to the Brunswig Drug Company. Now it was time to make a residential statement.

The Los Angeles Times of April 5, 1908, reported that Emeline Childs had sold a large Adams Street plot west of her own house to an unnamed buyer; the dimensions were 173 feet fronting Adams, with a depth of 500 feet. On the same day, the Herald reported that architect Francis X. Lourdou was working on plans for an 80-by-80-foot, U-shaped house in an "early Italian Renaissance" style for Lucien Brunswig, to be built of hollow tile covered with plaster and ornamented with white terra cotta. It was described in other news reports as having 16 rooms, 6 bedrooms, and, among other features, a ballroom and a rooftop conservatory. Second-floor joists were being raised by August 1908; the Brunswigs were making use of its lavish spaces early in the new year.

What was initially numbered 2640 West Adams became 3528 after citywide annexation-related address adjustments in 1911 caused nine blocks of the street to disappear numerically. The Brunswigs would stay put in their marblelike palazzo not only through address changes but on through the steady decline of the larger Adams District. Within a decade, Wilshire Boulevard had begun drawing the affluent away in force; in 1911 a giant sucking sound began to be heard—if imperceptibly at first—as Wilshire-adjacent Windsor Square and Fremont Place opened in what was being called the "West End"; the sound would become deafening when Hancock Park opened a decade later. Beverly Hills began to awaken from its sales slump once its famous pink hotel opened in 1912. Adams Boulevard beyond Western Avenue would hold its own for the time being, anchored by nearby Berkeley Square and later by the William Andrews Clark Library; there was even some new house building by the city's social Old Guard in the '20s and even into the early years of the Depression. By then, however, the district was getting distinctly threadbare in its eastern reaches, with declining property values creeping fast toward Culver City, where Adams terminated. Lucien and Marguerite Brunswig held on at 3528 even longer than Emeline Childs nine impressive doors away; she died in her house at 3100 in 1935. On July 17, 1943, Lucien would expire at home a few weeks shy of his 89th birthday after a long business career and noted philanthropy; his body was sent to be interred alongside his first wife in the famous pyramidal Brunswig tomb at Metairie Cemetery in New Orleans. Marguerite clearly did not wish to remain all by herself in a rambling, expensive-to-maintain old house for which servants were hard to find in wartime, in what was by now a shabby neighborhood. After selling 3528 to a dentist, Guy Van Buskirk, in 1944, she moved to a small English cottage in Beachwood Canyon, where she would die on September 28, 1946. (While the Times reported two days later that her body was also sent to New Orleans, she appears to have been buried somewhere other than the Brunswig pyramid there.)

The enormous houses on the stretch of Adams Boulevard on which the Brunswigs lived—the status of Adams was officially upgraded from mere "street" in the '20s—were naturally ripe for conversion to institutional use, particularly to churches, which, of course, are not subject to taxes. Could this gambit have been the idea behind the city's issuance on June 10, 1948, of a new certificate of occupancy to Dr. and Mrs. Van Buskirk after they had a room in the house converted to a church? While some neighboring houses also became religious addresses, thus preserving them to this day, 3528 West Adams would last only until 1955, when, on June 20 of that year, the Department of Building and Safety issued a permit for its demolition. Within a year it was replaced with the 60-unit apartment building that still stands on the site today. At least taxes on the property would once again be paid.


NOTE: As were a number of the larger Adams boulevard houses in the neighborhood, the Brunswig residence turns up with some frequency in film; John Bengtson describes its appearnces in Silent Locations