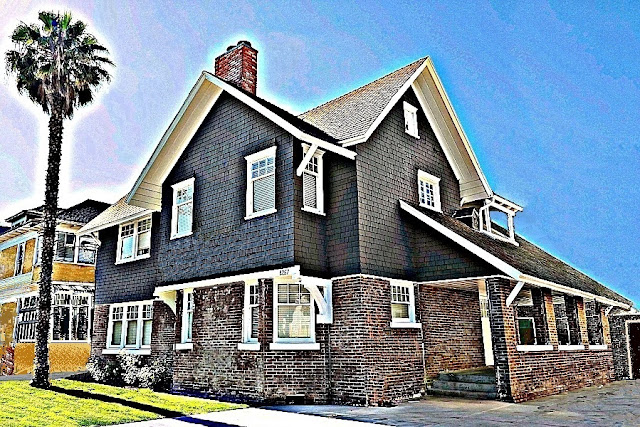 While West Adams Street—as the boulevard was known until its official upgrade to "boulevard" in the 1920s—became known for its grandest houses, especially after its westerly estate section took form after 1900, many of the city's California Club establishment, professional division, were more comfortable in the smaller houses that characterized the thoroughfare's central neighborhoods from Hoover Street to Western Avenue. Typical is the house built in 1904 by attorney Albert Hodges Crutcher on a parcel comprised of Lot 9 and the westerly half of Lot 8, Block 2, of the Urmston Tract. On November 20, 1904, the Los Angeles Herald reported that Crutcher, his wife, and their two young children were expected to move into 1257 West Adams Street "in a few weeks." 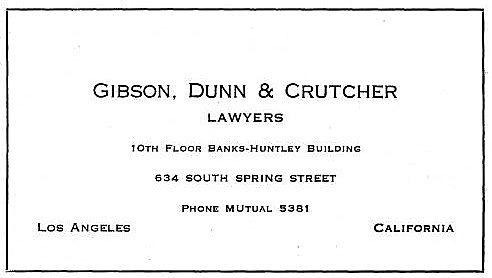 Albert Crutcher was a Kentuckian who had come to Los Angeles in the 1880s, working as a deputy city attorney before founding a law firm with William Dunn, which through early-20th-century mergers became the white-shoe firm of Gibson, Dunn & Crutcher. Still one of the top firms in the country, it is now known, internationally, simply as Gibson Dunn. Albert's wife, Tennessee-born Kate Page Crutcher, was no less of a major figure in Los Angeles's higher social circles, if perhaps more beloved due to her more visible philanthropic efforts, most particularly on behalf of Children's Hospital of Los Angeles, of which she was an early organizer and its president for nearly 40 years. One of her projects to benefit the facility was a thrift shop, for which Crutcher would importune her fellow matrons for contributions with the slogan, "What's unbecoming to you, should be coming to us"; she was also tireless in organizing guilds of volunteers and, of course, raising money with a face and Southern charm that no one could refuse. Along with Albert, she devoted herself similarly to the Community Chest. Kate Page had come to Los Angeles from Memphis with her recently widowed mother not long after Albert Crutcher had arrived; urging the move west was Kate's 18-months-older sister, Belle, who had married Willoughby Rodman of Los Angeles in 1892.

The Crutchers were married at West Adams's St. John's Episcopal Church at high noon on April 17, 1895; by the 4th of July, the couple was building its first house. For a lot at 1025 West 24th Street they'd bought the previous December, the couple commissioned the top firm of Eisen & Hunt (a.k.a. Hunt & Eisen)—Theodore A. Eisen and Albert's fellow golf enthusiast Sumner P. Hunt—to design the gambrel-roofed house that still stands there. Meanwhile, Kate's mother had bought two lots nearby on Orchard Street, just south of Adams; she built a house for herself at 2623 Orchard and one next door at 2619, which she rented; both also still stand. This second house was another with a gambrel roof, very like that of 1025 West 24th. It and Mrs. Page's own seem likely to also have been products of the firm of Eisen & Hunt. Now having had their first child, John Page Crutcher—he was born on May 18, 1901—Kate and Albert would make a stop at 2619 after selling 24th Street in 1902. It was when their daughter Roberta was on the way in 1904 that the family prepared to move again, relocating from 2619 Orchard Street to a new house at 1257 West Adams Street, just around the corner on a parcel comprised of Lot 9 and the westerly half of Lot 8 in Block 2 of the Urmston Tract. It seems that Sumner Hunt, now in partnership with Wesley Eager, might have been called upon to design for the family for a fourth time—we say "it seems," as no definitive documentation of his having designed the house has yet crossed our desk—producing an especially lovely house, somewhat cottage-like but deceptively commodious, that would please its chatelaine for the rest of her life—almost exactly the next 50 years.

By Christmas 1904, the Crutchers were settled into 1257 West Adams with John and Roberta, who'd been born on June 19. Albert's routine involved business, his firm being known at the time known as Bicknell, Gibson, Trask, Dunn & Crutcher, with offices in the Bradbury Building, a short walk from the California Club; as an avid golfer, not far away from home, at least for the next five or so years, was the Los Angeles Country Club at the northwest corner of Pico and Western. Kate ran the new house, organized the children, and ramped up her charitable activities, becoming president of the Children's Hospital in 1907. In 1912, a garage was added to the property; in a joint deal, Crutcher and his easterly neighbor, investment man Joseph H. Bohon of 1245—he was married to a cousin of Kate's on the Page side—had builder Clinton Campbell erect adjacent outbuildings on their lots under a single permit issued by the Department of Buildings for the address 1249 West Adams on May 4, 1912. On October 30 of the next year, the Crutchers added a 20-by-14.5-foot two-story wing to the northwest corner of the house, with a bath on the first floor and a sleeping porch upstairs. There would be little change to the structure of 1257 West Adams for next 102 years.

Albert Crutcher was the senior partner at what was now Gibson, Dunn & Crutcher when he died at home on August 2, 1931, age 70. He had had a heart attack in early July, followed by a stroke, and, presumably because Kate and Roberta were aboard the SS De Grasse due to arrive in New York from Europe on July 25, confined to bed at the home of his physician, Dr. Granville MacGowan, at 3726 West Adams Boulevard. Kate arrived in time to be at her husband's bedside when he died after having been moved home. Hailed as an upstanding citizen and legal expert in matters of probate, water rights, and electric railways—he had handled Henry Huntington's affairs for years—his funeral was at St. John's followed by cremation at Inglewood Park Cemetery. Kate would remain at 1257, apparently ignoring the drastic changes to the neighborhood and en masse departure of her social cohort to newer neighborhoods and tirelessly going about her work. John had married at St. John's in 1927 and, as much of a West Adams diehard as his mother, even built a new house in 1933 at 8 Berkeley Square, which he wouldn't leave until after his mother left the long-in-transition district. Kate, active until the end, died at 1257 West Adams at the age of 85 on October 28, 1954. As loyal a West Adamsite as there was, her service was at St. John's, after which her cremains joined Albert's at Inglewood Park.

In her will, Kate Crutcher left 1257 West Adams to the psychiatric clinic of Children's Hospital, a bequest no doubt at the urging of modernist Roberta, who probably had little West Adams nostalgia and who the year before had had architect John Rex build a house far way on Beverly Hills–adjacent Sierra Alta Way. The hospital now apparently cashing in its chips, 1257 was on the market in the spring of 1957. It was described in Times classifieds as "a fine old mansion" of 11 rooms with 3½ baths, available for $16,500. ("Better hurry.")
It wasn't until well into the 21st century that, along with the re-gentrification of the West Adams district, 1257 would be readied for its next 111 years. While the house itself would be beautifully rehabilitated, there would be something of a price paid in the changes made to the lot, in terms of ambience, to make the property viable in modern times. The Department of Building and Safety began issuing various permits for restoration work in the fall of 2015. In preparation for a new three-story outbuilding that now looms over the 1904 structure, the first step was to remove the rear addition made by the Crutchers in 1913, a permit for this work being issued on November 12, 2015. On February 8, a permit was issued for the demolition of the 1912 garage. (The garage on the former Bohon property would remain.) Eight days later, a permit was pulled for the three-story, 46-by-22-foot duplex dwelling with parking underneath that rises, wall-like, behind the old house. The complex is today under the management of Mosaic Student Communities, a property-management service that offers students housing adjacent to U.S.C., as well as at other California campuses.