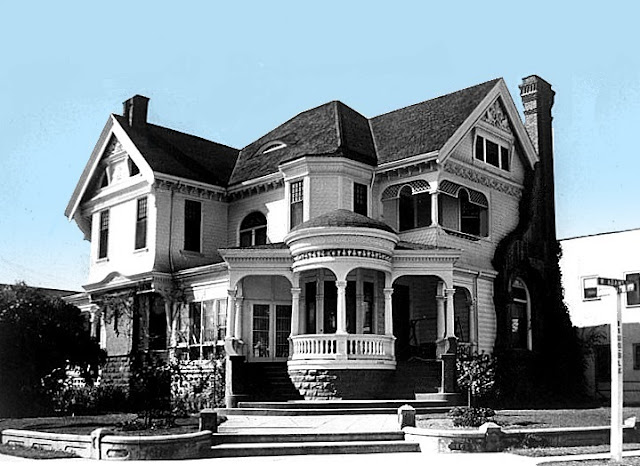 Against the odds, the big Queen Anne house completed in 1893 by the well-provided-for and well-connected widow Kate A. Kelly still stands at the southwest corner of Adams Boulevard and Monmouth Avenue. Mrs. Kelly's father was Andrew F. Mackay, active in Virginia City during the Comstock era though apparently unrelated to John W. Mackay, one of the famous Silver Kings. Father and daughter together assembled three Monmouth Tract lots fronting Adams Street, as it was then called, Kate gaining full ownership in September 1892. Mackay became a fairly prominent contractor in Los Angeles after moving south from Nevada and it might be presumed that he served as such for his daughter's house, the plans for which seem almost certain to have come from architect George Franklin Barber, who worked nearly 2,000 miles to the east in Knoxville, Tennessee. Barber's pattern books of designs had wide distribution; through them, he sold his plans to builders all over the country. 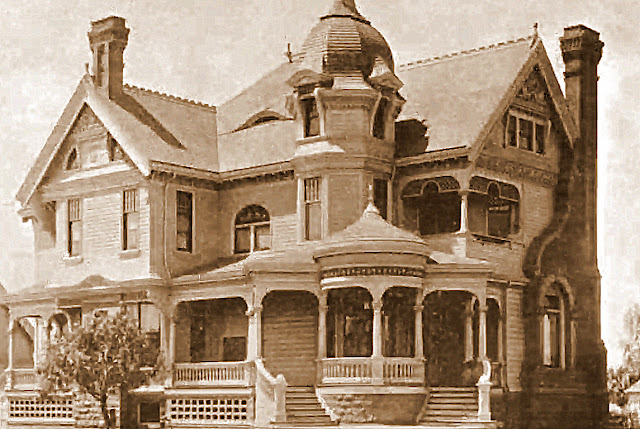 It may be that some contractors, if not A. F. Mackay, merely copied Barber's designs or purloined certain distinctive elements. It could be confusion over Mackay's initials and occupation and daughter's name that have some sources citing "A. E. Kelly" as the builder of 1140 West Adams. Adding to the puzzlement was an unrelated second George F. Barber, who arrived in Los Angeles from Oxford, Massachusetts, in 1904, becoming a well-known building contractor. The seed of the greatest confusion over the design of 1140, however, can be traced to the October 2003 application to have the North University Park Historic District included on the National Register of Historic Places, which in turn may have relied on information in the thesis that Masters candidate Frances Burrows Flood presented to the faculty of the Department of Fine Arts at U.S.C. in June 1941. The Flood dissertation cites the recollection of a member of the Chester Ashley family, who owned 1140 at the time, that the Los Angeles firm of Bradbeer & Ferris was the house's architect; in its description of Bradbeer & Ferris the National Register application cites the team definitively as the architects. James Bradbeer and Walter Ferris did not in fact form their partnership until August 1893, which would have been after the likely completion date of the Kelly house—indeed, Kate Kelly was listed at the "SW cor Monmouth Av and West Adams" in the 1893 Los Angeles city directory, which would have been set in type by midsummer if not earlier for fall publication. 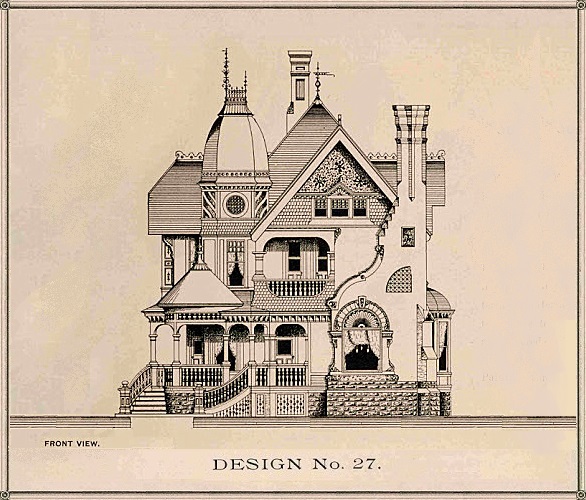 Illustrating the geographic opportunities of affluent Los Angeles as well as the tenuous hold that the cachet of West Adams had over that cohort, it is interesting to note that another of Andrew Mackay's daughters, Ida, had married developer Willis D. Longyear in February 1893; early in their marriage, the couple lived with Kate on Adams Boulevard. By 1907, confident of the continuing residential building along extending Wilshire Boulevard, the Longyears built a sizable house in what were then bean fields at the northwest corner of Wilshire and Ardmore Avenue in 1907. It was the first house built on the then-unpaved avenue west of Western Avenue. (The full story of 3555 Wilshire Boulevard is here.) By 1908, Kate Kelly was living at Hobart and 22nd Street in recently developed West Adams Heights; that December, her daughter Irene married automobile man Earle C. Anthony. In 1910, the couple commissioned the Greene brothers to design another Wilshire Boulevard house—addressed 666 South Berendo Street—one that was moved to Beverly Hills in 1922 and still stands there.


It was the competition of successive residential developments along the lengthy Wilshire corridor that would ultimately prove fatal for the genteel aspirations of old Adams Boulevard, even for its newer adjacent subdivisions such as West Adams Heights and Berkeley Square. Even before the Depression set in, housing demands as Los Angeles more than doubled in population in the 1920s made it attractive for many West Adams property owners to move to newer suburbs such as Windsor Square, Hancock Park and other westerly developments and sell their old barns for reconfiguration into income-producing flats or to replace them altogether with lucrative apartment buildings. The Kelly house was offered for such conversion or replacement when its second owner, banker and fisheries executive Aurelio Sandoval, departed in 1925 and advertised the site as ideal for redevelopment. A merciful, if temporary, conversion triumphed over demolition; a small advertisement in the bulletin of the Los Angeles County Medical Association early the next year offered 1142 for rent: "Designed for physician's office and residence, with separate entrances—lower duplex of five rooms and sleeping porch—handsomely decorated—every convenience—gas furnace and open grates—fine neighborhood—prominent location—first corner west of Hoover. Near U, A and V cars. Phone owner BEacon 2173." It seems, however, that the new owner who moved in in 1926, insurance man Chester Carlisle Ashley, kept the house as a single-family residence. He would stay two decades until relocating to Santa Monica, dying there in 1948.


The Kelly/Sandoval/Ashley house was initially numbered 1100; in 1898, with Maria Wilcox's new house being planned for the southwest corner of Adams and Hoover, an address realignment rendered it 1100 the Kelly house 1200. When Frank K. Wilson completed his new house at the southwest corner of Adams and Magnolia in early 1901, it took 1200 as its address and Kate Kelly assumed "1142." After the Sandoval and Ashley tenures, the address was altered yet again, this time to its current 1140. Typical usage of a big Adams Boulevard house followed: As many were, 1140 was carved into rooms to be occupied largely by U.S.C. students, as it still is.

The house was designated Los Angeles Historic-Cultural Monument #295 in 1985.