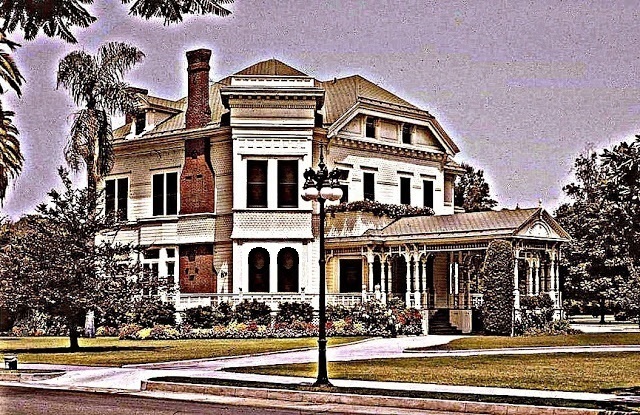 The house above may look vaguely familiar to some, featured as it was, more or less, in a short-lived but now classic mid-1960s television series. While the building itself never moved in its 79 years, its address changed during the early period of residential development along Adams Street west of Figueroa. Completed in 1888 by the landowning Newhall family, the house was described in Los Angeles city directories only vaguely at first, as were the few other dwellings that dotted the neighborhood. Per the 1888 edition, it was on the "N s Adams bet Figueroa and Scarff." While set about 450 feet north of the north curb of Adams, it would have been easily spotted: The new subdivision called St. James Park had only just opened adjacent to the Newhall property to the west, and Chester Place just to the east was still the estate of Judge Charles Silent and not improved at all beyond Silent's own house and outbuildings. Before long, there were enough residences nearby to compel numbering for convenience, especially once the area began to develop in earnest after the damping effects of the national financial vicissitudes of the '90s—development which included the transformation of Judge Silent's long straight driveway to his house from Adams Street into Chester Place. Before that gated lane opened for lot sales in late 1898, Judge Silent's address had gone from vague description to 711 West Adams Street by the time the 1891 city directory appeared. While the precise approach to the Newhall house from Adams is unclear, it would have became 747 West Adams Street at the same time; this was first reflected in the directory of 1894. Once Chester Place was mapped, a short street conforming to and at first named West 25th Street connected the former Silent property to St. James Park, running in front of the Newhall residence. The directory of 1899 was the first to reflect its third address: 735 West 25th Street. And then there would be a fourth, adopted between the 1901 and 1902 editions—21 Chester Place—which stuck until soon after the Department of Building and Safety issued a demolition permit for the house on June 9, 1967.

For the definitive story of the house occupied by two fabled families—originally by the Newhalls and later by the Addamses, who were in residence from 1964 to 1966, using the temporary address of "0001 Cemetery Lane"—essential reading is James Myers's illustrated "21 Chester Place," available here.