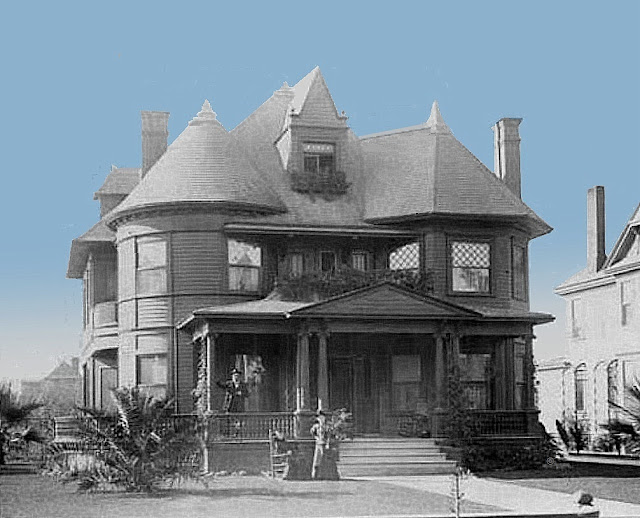 While the familiar idea of old West Adams is of its signature boulevard west of Figueroa Street, where the biggest and most picturesque houses were built, there was a time before the Harbor Freeway rent the district when the eastward stretch was very much the match of the westward, at least in terms of the names involved in building residences along the street. As the affluent abandoned Bunker Hill, the general trend was to the southwest corner of the original city limits of Los Angeles as incorporated on April 4, 1850. Property there became economically viable once U.S.C. was founded at the tip of the corner on October 6, 1880, providing a sense of long-term stability to the district. Residential development had moved south along Main, Broadway, Hill, Grand, Flower, and Figueroa, with the enormous houses of Figueroa spreading eventually to meet those on Adams, the intersection of the two streets providing a social nexus. When Los Angeles's energetic city-builders chose to build on Adams Street, they first settled the stretch between Main (more or less) and Figueroa; as the city grew, before competition among tracts for the residential dollars of the rich got serious with the opening of Wilshire Boulevard and at least a half-dozen other alternatives, Adams held its own with the affluent for much of its westward length; many families who started on its eastern segment later built even bigger houses on its western stretches. The house at 226 West Adams Street became a nexus all by itself, one of city-builders and social leaders who would evenutally move west with the thoroughfare as it began its slow fade in the 1920s.

Ezra T. Stimson was one of six children of lumber baron Thomas D. Stimson, who built his famous and still-standing red-sandstone house at 2421 South Figueroa Street, just above Adams, in 1891. Having married Annie Waters in their native Michigan in 1886 and having moved west with his father and the family business, Ezra was living at 2421 when he was issued a building permit in February 1893 to build a house of his own at 226 West Adams Street in Victor Dol's tract on the south blockfront of Adams between Main and Grand. Ezra's only sister was Olive Jane, who had married John Joseph Fay Jr., then one of her father's Michigan employees, in Muskegon in 1876. By all accounts, Olive was the apple of her father's eye; the Los Angeles Times reported after her death in 1907, that she had inherited one-third of her father's estate after he died in 1898, despite being only one-sixth of his children. He had also, according to press reports, advanced her the money to build a new house at 240 West Adams, on the prime southeast corner of Adams and Grand, two doors west of her brother. Olive was issued a permit for the new house in April 1897; the Fays were in residence by the third week of that October. A Los Angeles Herald editorial roundup of local building during 1897 cited Frederick L. Roehrig as the architect of 240, while another source claims that the designer was Carroll H. Brown, who had built T. D. Stimson's Figueroa house. (Brown would, incidentally, be in charge of alterations by the next owner of 240, Hancock Banning.) The architect of 226 has not yet been confirmed.


A capsule history of the westward development of the West Adams district is traceable to both 226 and 240, with those who settled first near Main Street now seeking, after just a decade, to build even more impressive houses for themselves. While the seminal Wilshire Boulevard Tract was opened for lot sales in 1895, quickly attracting the likes of Harrison Gray Otis and Edwin T. Earl, Adams Street would maintain its social self-confidence for another few decades, even as alternatives as far as Pacific Palisades emerged. Ezra and Annie Stimson decided to leave 226 in 1900, renting temporarily two successive houses nearby. It was not a matter of downsizing, however; they had in mind a larger house in the extremely fashionable St. James Park tract less than a mile to the west. St. James Park, laid out around a square in 1887, had seen slow lot sales during the recessionary 1890s. Ezra's father's death in 1898 made him even richer in his own right. In 1901, the Stimsons bought a building site comprised of five St. James Park Tract lots facing Adams Street rather than the subdivision's interior greensward and, hiring as architect F. L. Roehrig—not Carroll H. Brown—built an extravagant new house, one much more modern than less-than-a-decade-old 226, at 825 West Adams Street, which still stands on the boulevard today at the northeast corner of Scarff Street. The Stimsons sold 226 West Adams to another family who would figure into West Adams history, one with business and social ties to the Stimson clan. Hannah Llewellyn, a widow, moved into 226 with five of her children, who ranged in age from 19 to 38, all unmarried. The four sons of the household were partners in one of Los Angeles's leading, if not most important, iron purveyors. The Llewellyn Iron Works supplied much of the structural and decorative metal that literally made the city—including the gates of Berkeley Square, which would open in 1904 as the West Adams district expanded over ever more barley fields to the west. It was to 7 Berkeley Square that the Llewellyns would move from 226 West Adams to continue their Southfork-style living arrangements, for better or worse, even, by the way, dragging tap-dancing actress Ann Miller into the mix.

Meanwhile, two doors away at 240 West Adams Street, Olive Fay was getting restless once her daughter Anna was married to attorney Walter Ransome Leeds in the Fay parlor in November 1903. She had become displeased enough with her husband to sell 240 out from under him in October 1905; Hancock Banning of the Wilmington and Catalina Bannings moved in. Soon after, Olive went abroad with friends for nearly a year, returning at the end of 1906 to write a new will that bequeathed to J. J. exactly nothing. She left town again the following March—with her brother Ezra T. Stimson in the party—only to die in Rome two months later. J. J., in the midst of contesting his first wife's will and squabbling over money entrusted to him by his daughter, remarried in July 1908; his bride was the very rich Agatha Sabichi, whose family had been next-door neighbors of the Stimsons on Figueroa Street. By this time Anna and Walter Leeds, who had been living in their starter home on Van Buren Place just south of Adams Street, bought a lot even farther west in the recently opened Berkeley Square. Their choice of a house there would extend the Stimson and Fay family connections from the older reaches of West Adams to its newer ones for two decades more until Anna Leeds died at 14 Berkeley Square in 1928. A little over three years later, Walter Leeds remarried another old West Adamsite, May Fulton, who had grown up around the corner from 226 West Adams; in a sign of the decline of the old district, Walter and May Leeds settled in the Windsor Square house to which she and her first husband had moved in 1919.

As the seminal stretch of Adams Boulevard evolved, it would be the first of the neighborhoods lining the length of the thoroughfare to see its houses converted to flats or replaced with apartment houses as owners upgraded and left the district or sought maximum profit from their lots. Prominent real estate developer Wesley C. Clark had built his own house next door to Stimson's 226, and also in 1893 (a glimpse of it is seen at right in the image above); while living at 234 West Adams Street, Clark was busy organizing one of many competitors for the housing funds of the well-heeled, the obscure Westmoreland Place. (The exclusive gated core of the eponymous subdivision, which failed to draw many rich families away from West Adams, opened on April 27, 1903; a remnant of it remains at the southeast corner of Olympic and Westmoreland Avenue.) Clark moved to his new development in 1905, attempting to sell, then rent, 234. Then, in 1909, altering the neighborhood permanently, he picked up 234 and trucked it less than a block east to 340 West Adams Street. Clark immediately redeveloped the vacated lot with a five-story, 70-foot-high apartment building named the Darby, after his mother's family, which stands today as the Grace Apartment Hotel. The construction of the Darby—especially that it would cast the Llewellyns at 226 into dark afternoon shadow—no doubt prompted the family to move on to newer, safely gated Berkeley Square. Clark then bought 226, adding a garage in 1916, and renting the property out. Later, 226 became the Darby's staff housing. In 1930, the Consolidated Hotels chain leased the hotel from Clark, converting it from a transient building into self-contained apartments. The Stimson/Llewellyn house appears to have been demolished at this juncture, its cleared lot then landscaped as a garden for the Darby. The single-family residential character of eastern West Adams was beginning to alter, following a 20-year pattern of change in the housing preferences of the affluent of Los Angeles, not dissimilar to their counterparts' contemporaneous move up Manhattan's grid on the opposite coast.